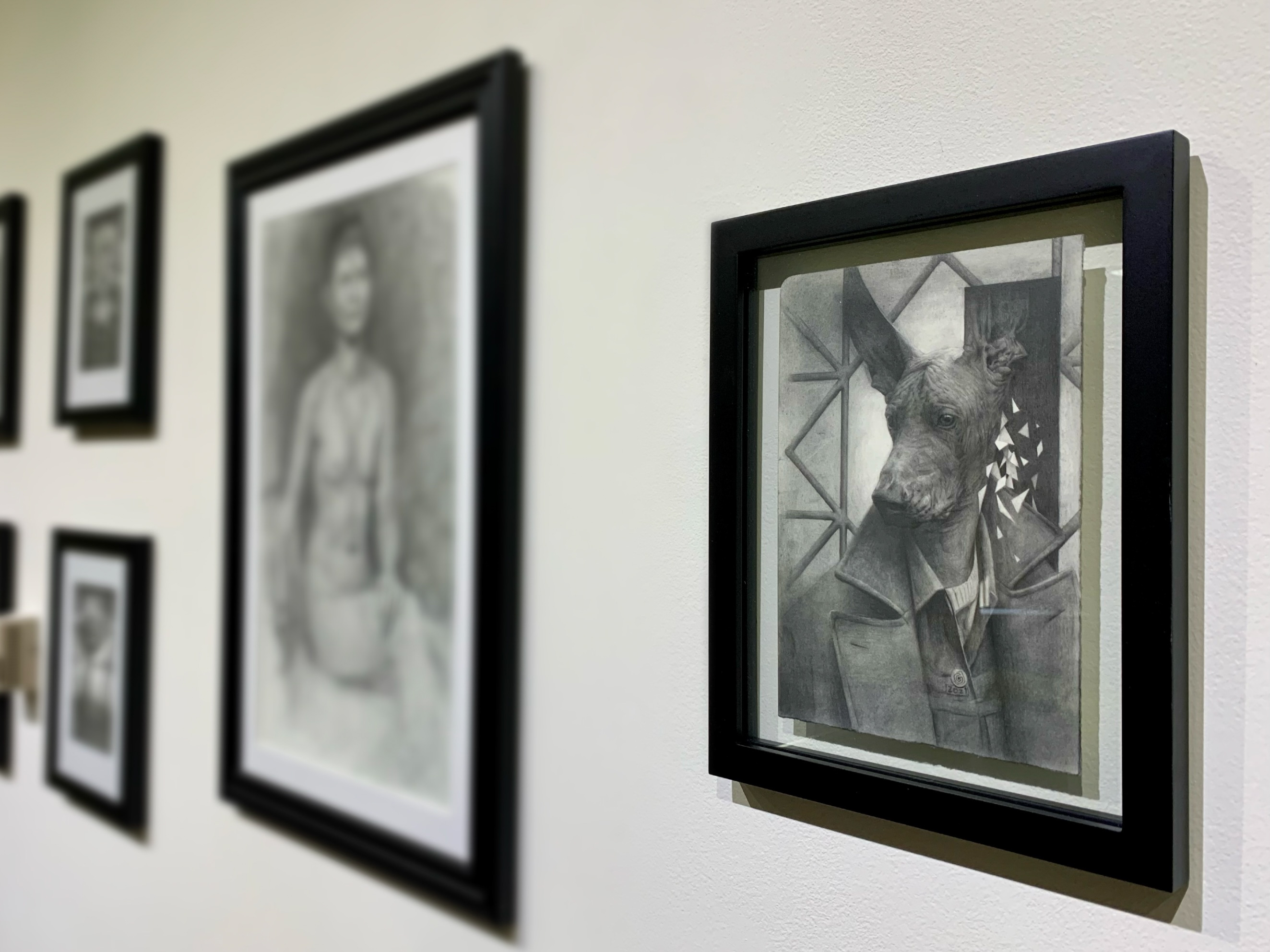 The mentioned artwork, "Xolo" being focused on as Judd's breakthrough piece. Photo by Carlee Rizzo.

Even a deadly global pandemic can’t stop artists from creating. For the past few years, COVID-19 has been shutting down the world, but artists have continued to be inspired and create meaningful art. Christopher Judd, adjunct professor at UAA, is among the creatives, and his first show since COVID-19 is now being showcased in the ARC Gallery, entitled “Dust on Pulp.”

Lining the walls of the ARC Gallery are portraits and life drawings — many featuring animals. In Judd’s artist statement he writes, “I’m a surrealist illustrator, and I spend my time pouring the images in my head onto paper and sticking them in frames.” The inspiration for many of the pieces of artwork are drawn from words. Some start with a title, such as “Cube Cat,” while others were part of an animal alphabet project where Judd was trying to work his way through the alphabet.

Judd has been creating art seriously for 14 years, but he was no child prodigy. “I hadn’t done any drawing until I was 20. There’s a lot of artists who have been drawing since they picked up a crayon and then just never put it back down. I wasn’t one of those artists that grew up just drawing. It wasn’t until senior year of high school that I actually started drawing.”

Judd tells of his unlikely artistic journey starting as a UAA civil engineering student then changing his major to art. “When I switched over to art, I was starting from the very, very beginning. I remember my first life drawing experience was at the Student Union gallery and sitting in a chair with a sketchbook and just trying to draw people that were around. I remember literally breaking into laughter at just how bad my drawing was.”

Judd says that he has seen improvement in his skill level throughout the years. Even in the pieces from the exhibit, you can see the progress that he has made. He points out one piece in particular, an animal portrait entitled “Xolo” featuring a Mexican hairless dog to highlight the improvement of his work. This was the breakthrough piece that Judd feels shows refinement and improved structure in his work.

Judd said, “What is cool about drawing is there is no real wasted time. It’s one of those kinds of pure pursuits where all the time you put in you’re given the reward of improvement and something you do until you’re in the ground assuming you don’t go blind or lose a hand.” This comment led into a discussion of the artists that inspired him to become an artist himself. Chuck Close and Francis Tsai were inspiring figures in Judd’s artistic journey. Each of them suffered afflictions and yet, nothing could keep them from creating.

“I mean, look at Chuck Close. He had a stroke, and he was in a wheelchair and his whole process changed as a result of his deficiency. There was this other guy who got Lou Gehrig’s disease, and his name was Francis Tsai and I received a lot of inspiration from him where eventually he got to the point that he was actually drawing with his eyes. He was completely paralyzed and still trying to create by doing this eye tracking thing where he could actually draw with the direction that his pupils were pointing at.” On the days that Judd doesn’t feel like drawing, he looks at these role models, who, despite debilitating adversity, still found ways to create art.

Judd continued, “This was the first thing that I felt like I could actually focus on and channel into something that didn’t feel like wasted time.”

Judd is a new adjunct professor at UAA,teaching life drawing and intermediate drawing in his first semester. He seeks to inspire his students and speaks passionately about the artistic process from his own experience. He said that it wasn’t until he embraced being awful and learned to enjoy the process that he could start laying his artistic foundation.

“There’s a lot of self-consciousness that can come from art … because it’s a really long process before you start getting anywhere close to the kind of artwork that you’re actually looking at that inspired you to become an artist in the first place … You’re just making it so much more difficult for yourself if you are hitting those really early stumbling blocks while you’re in the depths of the learning process.”

Young artists often give up on their artwork because of the time and patience it takes. However, Judd is here to remind them that, “as long as you enjoy it, that’s what keeps you coming back to it.” The artistic process is a long and difficult one, but it just might be worth it.

“That’s usually for, from my understanding, for most artists there is a shift around the 10-year mark where it kind of becomes who you are in a way. It’s weird, it kind of happened for me around that mark where you don’t get quite as hung on the technique or anything it just becomes a meaning of expression. It’s weird, it’s hard to explain. It just becomes what you do and who you are as a person. It’s interesting.”

After years of creating, Judd has gained a valuable perspective from his experience, which he is sharing with the next generation of artists at UAA.

Come view the exhibit and look closely at the detail, Judd invites. The “Dust on Pulp” exhibit will be shown in the ARC Gallery until Dec. 16, 2022. More artwork by Christopher Judd can be seen on his Instagram @dao_ofdraw.