Maple and Vine: A Review 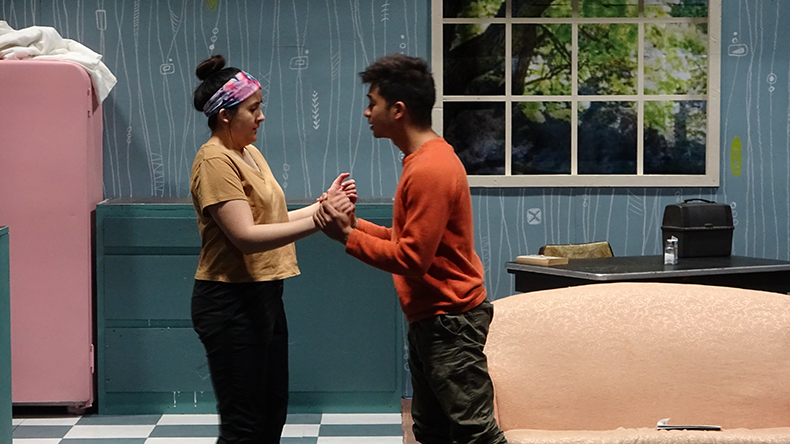 Kathryn Hoke and Elmer Bungay Jr. share a scene as Katha and Ryu in Maple and Vine. Photo by David Harding

Despite recent news of UAA Theatre’s cancellation in Spring 2023, coming off of the greater budget struggles the University has faced from rising costs and COVID-19 restrictions, the dedicated few in the department, from its faculty to students, have not let events prevent them from putting on amazing shows. This passion showed itself in their most recent production, Maple and Vine by Jordan Harrison, which ran from March 27th to April 3rd. Like every Theatre production, the small yet dedicated group of thespians that put on the show showed impressive quality in acting, costume design, and the very set contained in the “black box” of the Harper Studio.

The main narrative of the play centers around a modern-day couple, Katha and Ryu, portrayed by Kathryn Hoke and Elmer Bungay Jr respectively in their first-ever roles, who have found themselves in an unhappy state after marriage thanks to the stress of their unsatisfying jobs and an unfortunate miscarriage that’s made Katha unsure if she will ever want to have a child again. It’s in Katha’s most vulnerable moment, putting in a notice to her workplace and left alone on a park bench due to Ryu being whisked away to his duties as a surgeon, she meets a man dressed like he’s straight out of the 1950s.

The sharp-dressed and silver-tongued stranger is Dean, played dynamically by Cade Harris, who serves as the main spokesperson for a unique community that lives within its gates like it’s the year 1955. With his equally devoted wife Ellen, played by UAA Theatre stalwart Galina Deitz, they convince an open Katha and a reluctant Ryu to spend an eight-month trial period as part of the community, also known as the Society of Dynamic Obsolescence. Despite living under the restrictions and often flawed values of the time, especially felt by Ryu as a Japanese American now living through a simulation of post World War II and internment America, he and Kathy (changing her own name to be period-accurate) come to find moments of self-realization and a deeper connection to one another as they navigate these issues.

Meanwhile, a hidden romance between Dean and box factory manager Roger, who was played by returning UAA Theatre alumni James Peritz, along with the latter’s longing to return to their honest life and love before the move into the SDO, threatens to shake the entire throwback society to its core.

Between the five actors, there are eight roles, with James and Galina both playing different characters besides their main roles with distinction that prevented any potential confusion. All five actors captured the heart of their characters perfectly; from Dean and Ellen’s cheerful, straight out of a 50s show facades that over the course of the play starts to erode with doubt, to Roger’s conflicted and repressed nature, and the sometimes fraught but always loving and believable connection between Katha and Ryu that helps bind together the sometimes surreal and confrontational scenario they end up in.

All three romances in this story, Katha and Ryu, Dean and Ellen, and Roger and Dean, all feel real, Harrison’s script coming alive through the voice and motion of the actors to show the highlights and lowlights of these relationships; the average and extraordinary moments that shape them all.

The content of the play, while not extraordinarily vulgar, did contain some challenging moments for certain audience members; mostly centered around the SDO’s willingness to maintain “authenticity” through enforcing sex roles and promoting racist and homophobic attitudes and language that varies between subtle to stark in some moments. These moments aren’t graphic, or built for shock value, but serve to further the playwright's message that neither glorifies or demonizes the modern or 1950s worlds; but acts as a critique and a show of positive and negative values of both periods of history and how they echo and differ between each other. The play seeks to make those who watch or read it ask questions among themselves while providing a concept just outlandish enough to keep from being too daunting for those new to its philosophies to handle off the cuff.

Costume design, prepared by graduating UAA senior Blake Blanning with wardrobe maintained by Brighton Coggins, was extremely effective at communicating to the audience when the modern world ends and the SDO’s impression of the 1950s begins. In a similar vein, the stage; crafted by the Scene Shop team led by supervisor James Bransetter, was able to work around the intimate space of the Harper Studio theater to create two separate settings, utilizing smart design choices and a hydraulic system that allowed for quick shifts and changes. Lighting, with Lydia Smith and Christian Howlett as the main technicians, was extremely well handled, especially during Katha’s dream sequences after she and Ryu make the move.

For those who were able to attend one or more of the showings of this play, I’m confident that they would agree that the efforts of the actors, backstage crew and faculty all put in their best effort in spite of emotional and financial tolls to tell challenging, heartwarming, and thought-provoking piece that asks a lot of questions prevalent today.

If you missed out on the run, I would highly encourage you to see the upcoming UAA Dance In Performance shows running from April 14th to April 17th; where the Dance department led by Dr. Jill Crosby will work alongside many faculty and members of the Theatre department to put on a stunning show at the UAA Mainstage theatre at the Fine Arts Building. Tickets are $10 for UAA students and $15 for the general public.