Gaming With a Purpose: The Way of the E-Wolves 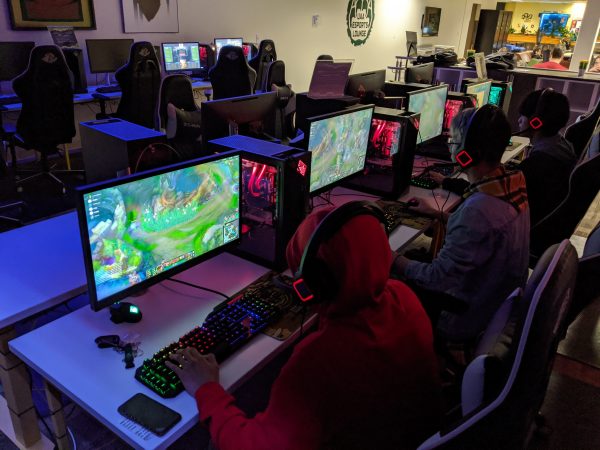 Esports have become one of the most popular forms of entertainment in recent memory; with several streamers and video game players attaining millions of views and celebrity status for their play. Whether you may want to dip your toes into the competitive scenes for games such as League of Legends and Overwatch, or just want to enjoy these games and more with fellow UAA students, there’s no better place to be than at UAA’s Esports Club.

One of the youngest clubs on campus, having been founded in 2018 after the Electric Gaming Federation (EGF) helped create several high school esports programs and leagues in the last frontier, these student gamers don’t only pride themselves on dexterity and hand-eye coordination that makes all the difference in competitions, but in academic success as well. In order to become an E-Wolf, students must be taking 6+ credits (part to full time) and report to club leadership weekly about their academic progress. Should a student fall below a 2.0 GPA, they will be benched until it’s improved. However, hopeful members shouldn’t be worried about meeting too harsh of requirements to be allowed on a team. Gamers of all levels of experience are welcome, and as Maddy, UAA Senior and current UAA Esports Club president, puts it; the most valuable trait a new member could have is interest.

“We’ve only had one instance of needing tryouts (during Overwatch boom in 2021). With COVID-19 it’s been harder to get club involvement, so we’re open to anyone who wants to get involved,”

The current active teams are in Overwatch and League of Legends, although the deadline for UAA to present its LoL team for the local league has already passed without enough members to fill it. When a team for these games is assembled, it’s up to them to decide on how often they would like to meet for practice and the duration of these sessions; as well as where to meet. The most ideal spot would be the UAA Esports Lounge located on the upper level of the Student Union; outfitted with several high-end gaming computers preloaded with the games comprising the E-Wolves season and more, although new games cannot be installed by members without leadership approval. Besides practice, inner club scrambles can be arranged depending on the amount of players available.

The UAA Esports Club isn’t just focused on competitive play, however. Like any club in UAA, there’s a social element to make things fun for all involved. On their official Discord, members can choose a game they would like to play together for a casual, fun night. The club also hosts on-campus events such as “VR Gaming Weeks”, where those involved in the club or not can go to the Esports Lounge for VR experiences, and online events.

On March 25th, the UAA Esports Club will be involved in hosting a 24-hour stream on their Twitch Channel to help raise donations for Children’s Lunchbox; an annual tradition since the start of the club. Other clubs will be involved as well, taking blocks of one to two hours to host online or even on-campus activities to show during the stream. The Esports Club itself has plans for a 5-on-5 staff vs students game of Family Feud, with students and faculty still yet to be chosen.

‍
If you would like to visit the UAA Esports Lounge for your own play, or make reservations, check out the lounge’s website at Esports Lounge | Students | University of Alaska Anchorage and their Twitter page on UAA Esports Lounge (@UAAEsportLounge) / Twitter. At the moment, Lounge usage is only available to UAA students and staff and COVID-19 measures and standards are in effect.