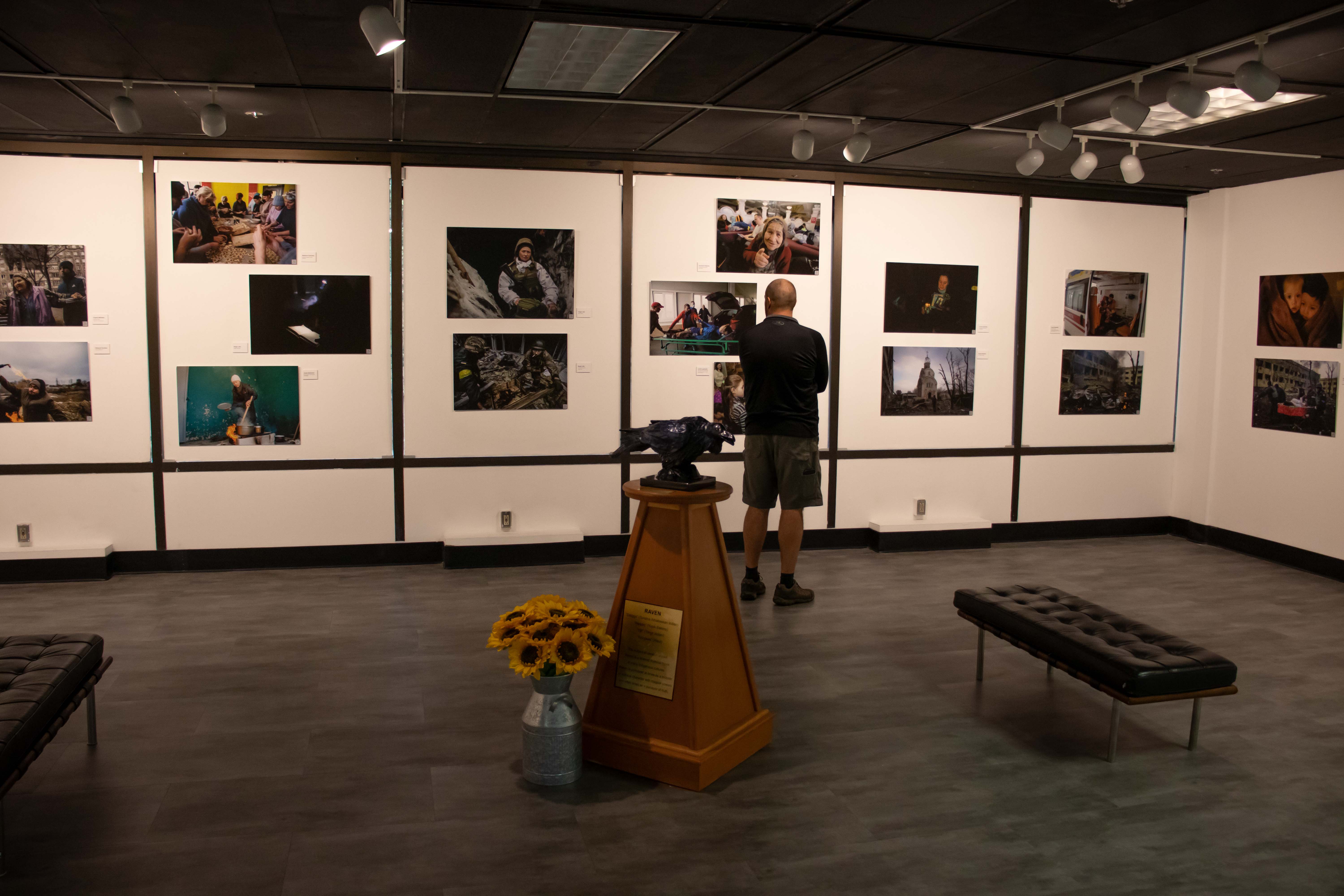 Pictures from the front lines in the war in Ukraine line the walls of the Hugh McPeck. Photo by Matthew Schmitz.

Last spring, after Russia began a full-on assault to take over Ukraine, UAA’s history department held a public talk on the background of Ukraine as a country and some of the steps leading up to the escalation.

During it, a Ukrainian woman made an emotional comment about her anger toward the Russians and abhorrence for the feelings overwhelming her.

“I have become hateful towards [them], and I hate in my heart … it’s no joke … it’s scary what the war [brings] into you.”

How can we understand this anger, and the resolve of Ukrainians to stand their ground against the Russian invasion? An anger and resolve we’d no doubt feel if our country was attacked, our homes and cities were bombed, our friends and family killed or wounded.

Bringing these grim realities to our attention is “Freedom from the other side of despair,” an exhibit in the Hugh McPeck art gallery.

Photos of the conflict, taken by fourteen different war photographers, line the walls of the gallery. Images that we may have quickly scrolled over on our phones – a pregnant woman being caried out of a hospital on a stretcher, an apartment building being bombed – are given a new, substantial reality, not so easily dismissed with a swipe.

Oksana Artz selected the photos and put together the exhibit. She was helped by Tetyana Kowach and Carole Anderson.

Artz said she worked with an organization called Soul of Ukraine to get access and permission to use photos from the Ukrainian National Independent Agency of News. Also, she said that she got permission from one of the photographers by reaching out to him directly.

The exhibit opened Aug. 24; the same day as Ukraine’s independence day. The opening was accompanied by the playing of Ukraine’s national anthem and music by Ukrainian artists.

Artz and Kowach gave some remarks to the roughly 15 people who attended, and a moment of silence was observed.

The pictures show the devastation wrought by bombs and other modern weapons of war: a destroyed shopping mall, a building reduced to rubble, streets lined with broken glass, twisted metal and debris.

Among the carnage are people. Some fighting, some mourning, some trying to comfort and distract others from the war around them.

There are extremely graphic pictures too: noncombatants who just happened to be too close to a bomb, mass graves.

I asked Artz on the opening night why she organized the exhibit, and she said she felt compelled to do something. If not her then who?

At a later interview with Artz and Kowach, Kowach said, “our roots are there, we gotta do this for our people, our country.”

Kowach and Artz were born in Ukraine but live in Alaska.

The goal of the event is to educate people about what is going on, she said. And they went with photos because images speak louder than words.

She also said they want to remind people that there is still a war going on, describing encounters with people that have expressed genuine surprise after learning the fighting is ongoing.

Artz said she had organized a similar exhibit in 2014 when Russia annexed the Crimean peninsula from Ukraine. For them, this latest escalation is just a continuation of a war that began eight years ago.

Both still have family there. Artz has a brother who is waiting his turn to be called into service and defend the country. Her mother just recently came to Anchorage.

Kowach has cousins with small children. Shortly after the fighting broke out in February, some of her family members left for Poland and others to the Czech Republic. The men had to stay behind, by law, to help defend the country.

After a few months they returned to their home of Kiev. Kowach said they were motivated by several reasons. They did not want to be a burden on their host countries, she said. They also wanted to help support war.

“My cousin says, ‘we’re needed more here than there, this is our home.’”

She also said that growing food is an important part of Ukrainian culture.

She said humorously, “That was a season of gardening, everyone is concerned about making sure their tomatoes and potatoes are growing, before anything else. Bombs are flying but potatoes and tomatoes have to grow.”

Just recently a bomb exploded near enough to one of her cousin’s homes to shatter the windows.

Kowach said that the war is largely about Russia trying to secure resources in Ukraine, especially in the eastern part of the country. She also said that Russia has made it clear they want to restore the borders of the Soviet Union, which Ukraine was once a part of.

The war will not stop in Ukraine, she said, and it will eventually come here.

In addition to the natural response of being attacked, Kowach said simply giving up is not an option given the Russians attitude towards Ukrainians, looking down on them and considering themselves superior. What might happen if Russia succeeds could be understood by looking at history, both recent and long past.

Artz explained her family history. Her grandmother was from Belgerod, a city Russia invaded and took over in 1918. Her grandmother’s last name was changed to a Russian one when the Russians took over.

Many of her grandfather’s relatives were also killed and he was sent to work on a farm as a small boy.

The fear is that Russians coming in today will take similar actions against Ukrainians, suppressing their culture, taking their resources, and using Ukrainians to fight in Russia’s next war as they have done with other people they’ve conquered, such as the Chechens, and send Ukrainians to work camps.

Kowkach said, “In the east with Mariupol … because it is fully destroyed there are a lot of orphanage kids … They have relatives in Ukraine for those children. They don’t want them to be back with relatives. They take them to Russia to assimilate. That’s it.”

And in Crimea the Russians kicked Ukrainians out of their apartments and set up the members of Russian intelligence and their families in their place, she said.

She emphasized that Ukrainians do not have the same political views as Russians, that many of the freedoms enjoyed in Ukraine do not exist in Russia, such as freedom of the press.

“[Ukraine] is still a democracy, people have a say, people have a way to go out into the square and protest. What’s happening in Russia? Do they protest? If they do they’re gone.”

While most of the pictures in the exhibit show the brutal side of the war, there are images of hope.

Maping Hong, a student here at UAA double majoring in Mathematics and Anthropology, works in the art gallery as an attendant. She pointed to a picture of a Ukrainian soldier walking past a field of sunflowers as particularly moving. She said there were so many sad pictures, yet for some reason that one gave her hope.

Attached to the pictures are QR codes that link to the charity Come Back Alive. Kowach said that they included information for anyone who might be inspired by the exhibit to help. Come Back Alive was established in 2014 in response to the initial invasion of Crimea and provides support for front line troops.