Emergency telephones down across campus 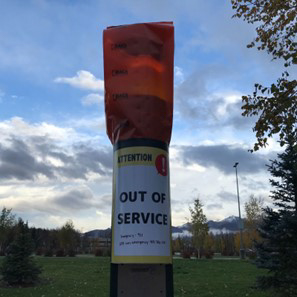 Along Wellness Street large green poles are covered in bright orange plastic bags. Pieces of laminated paper are taped to the front reading, “OUT OF SERVICE,” covering the original emergency buttons. Known as “blue light emergency phones,” these out-of-commission poles are scattered across campus, leaving one of UAA’s methods of campus safety in operational.

In an interview with the Associate Vice Chancellor for Facilities & Campus Services Kimberly Mahoney, she said the emergency phones started having issues three years ago. Annual night safety walks revealed that the emergency phones were intermittently flipping between working and not working. It wasn’t until recently that the university finally found the culprit: The copper lines that connected the phones to the system.

Copper wiring, however, has been a mainstay of many emergency systems because copper will still continue to work in the event of a power outage. It’s only recently that emergency systems have been transitioning away from copper and toward wireless communications systems.

In an emergency people can call 911 on their cell phones regardless of whether they have a cell carrier or not. Earle also said that UAA students can use the RAVE Guardian app. Through the app, individuals are able to set safety timers, discreetly contact UPD, call for help, and stay informed on campus safety.

Both Mahoney and Earle said that getting the emergency phones operational again is a priority at UAA. However, due to supply chain issues that impact ordering parts, repairs have been delayed and there is no date for when they will be repaired.