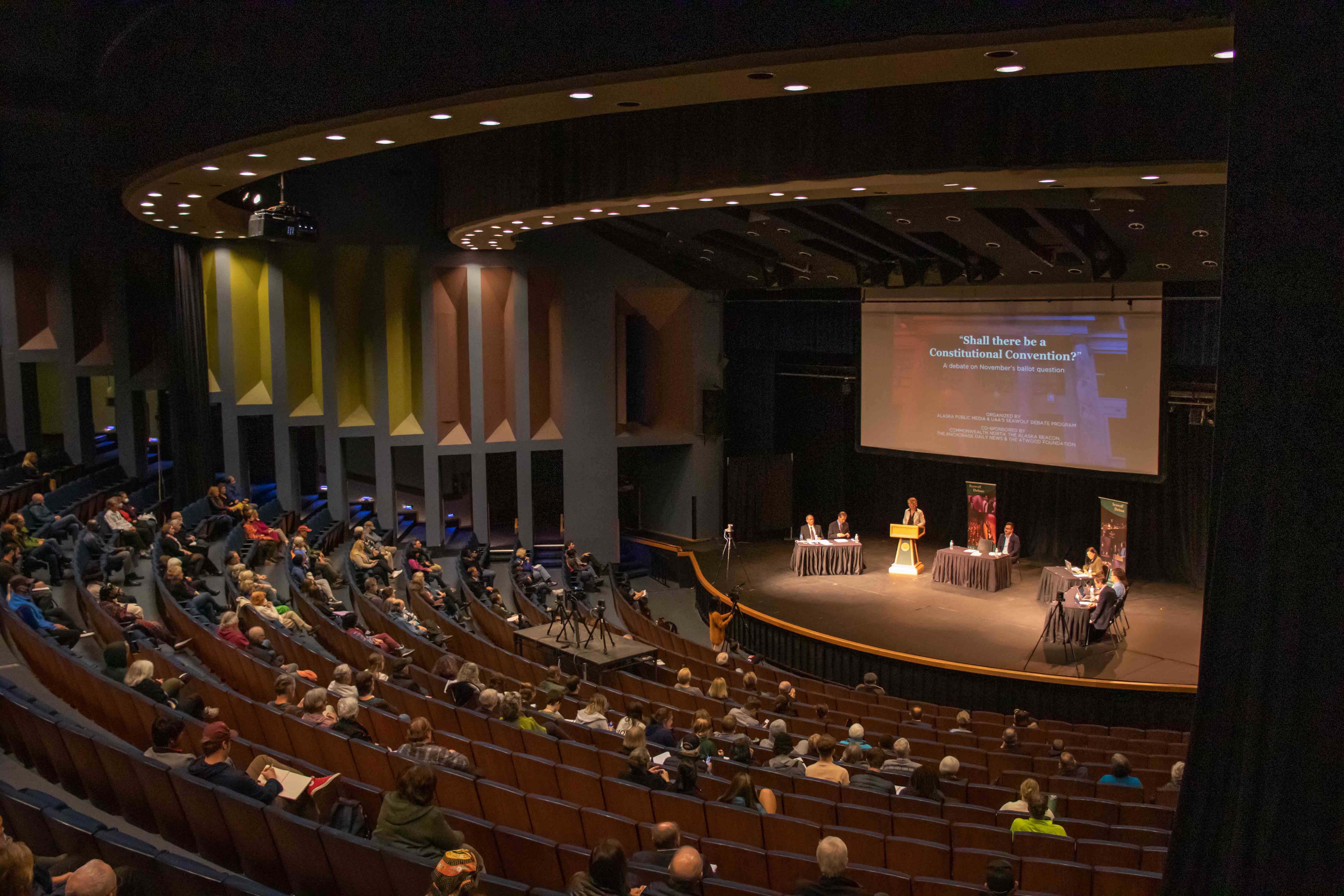 Hosted by Seawolf Debate and moderated by Alaska Public Media, advocates from opposing sides met on Sept. 29 in the Wendy Williamson Auditorium to debate the question of whether Alaskans should vote to approve a constitutional convention this November.

The “yes” side listed a handful of issues they believe would justify holding a convention, including making payouts of the PFD a part of the constitution, problems of overreach on the part of the state judiciary branch,and failure of the other branches to check their power, describing many of the provisions in the constitution as experimental and tyrannical.

The “no” side argued that the convention would be along-drawn-out, expensive process, and said that the uncertainty surrounding regulations and rights would push people and business out of the state.

They also said the convention would open for debate every contentious political issue – including abortion, with no telling what the results would be.

Over 100 people turned out to hear what each side had to say, including former State Senator Vic Fisher, who helped craft and sign the original state constitution.

Speaking with TNL reporter Kacyee Davis, Fisher did not shy away from his opinion on the matter when he was asked why he was attending the debate.

“I was a member of the 1955 constitutional convention, and I want to see what’s going on all these years later and why people want to destroy what we have.”

Fisher is the last surviving member of the 50 signees who put their names to the constitution in 1956.

Most people who spoke with TNL said they were there to hear what each side had to say about the issue.

UAA writing department professor Jackie Cason said: “We are big fans of Seawolf debate, and we believe that a robust debate … helps clarifies our thinking on any given issue, and we think this is a really important issue, the constitution of the state of Alaska, which is renowned for being one for the best constitutions in the nation. So, I am inclined not to want to amend it, but I am here to listen to the arguments around it.”

Another attendee, Syl Fowlis, said: “This is the first time I’ve heard about this, honestly … I want to learn a little bit more. I watcheda powerful program on PBS … the local public channel. [Those] who were interviewed were clearly against it, and I knew there had to be another side, soI decided wanted to come find out what the other side had to say.”

Each side had time to present their case and were asked questions from a panel of journalists.

Arguing for the “yes” side were former Lt. Gov. Loren Leman and Chairman of the Alaskan Independence Party Bob Bird.

Going first, Bird said the biggest issue was the PFD, saying that the legislature’s failure to pay out a full PFD was the main cause for a convention.

“That is the engine that is pulling this con-con train.”

Leman said that while in office, he helped to create four amendments to the constitution. He said the problem with selecting judges is something every governor has complained about.

Regarding the unknowns that may come out of a convention, the“yes” side said that Alaskans were accustomed to taking risks, and that a convention would bring together a broad group of delegates from across the state, that would produce better results than the representatives in Juneau.

On the “no” side were Alaska AFL-CIO President Joelle Halland owner of Fathom Strategic Communications, Matt Shuckerow.

Hall said that opposing the convention is a large group of Alaskans from across the political spectrum.

She said that a convention would mean that the entire constitution could be subject revision and “open a Pandora’s Box of hot buttonissues.” She said that the state already has a mechanism for dealing with changes to the constitution.

“Our state’s founders included a separate, well-devised and transparent amendment process to make targeted changes to our constitution.That process has worked well for us on 42 separate occasions.”

Shuckerow said many businesses oppose the ballot measure and estimated that a convention could take 4 – 6 years.

Addressing the “yes” side’s problems with the state legislature, he said the process of the convention would depend on the “the very legislature they criticize.”

Shuckerow, himself a Republican, said that opposition to the convention is bipartisan despite the “yes” side’s attempt to make it a partisan issue.

“In fact, Wasilla Senator Mike Shower himself on the senate floor a year ago said that addressing the permanent fund dividend in the constitution would be ‘dangerous.’ He says, if this goes to a constitutional convention,we ‘might very well lose control and have things that nobody on either side wants.’”

The issue of abortion came up, and Hall said that holding a convention “could result in the forces of both sides of that argument flooding into Alaska to use us as a proxy for this national fight.”

Bird asked if people wanted judges or their neighbors to define personhood.

The “yes” side contested the amount that the convention would cost, and Bird said there was uncertainty in everything we do, but thatshould not stop us from holding the convention. He also said that we could always stop it if things were not going well.

The “no” said that would be an extremely expensive experiment.

Immediately following the debate, Alaska Public Media ran a poll of people who were watching to find out where the audience stood on the question after hearing the arguments. Voting by text message, the audience overwhelmingly voted to oppose the measure, with 74% voting against. Only 24%voted “yes” and the remaining 2% undecided.

The debate was live streamed on Alaska Public Media’s Youtube page and can be watched here: www.youtube.com/user/aptiadmin