Chancellor knows what makes students tick so they talk 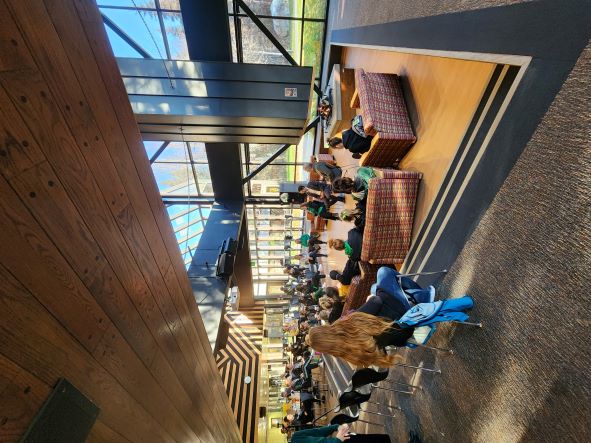 Homecoming weeks festivities and events included the Fall Fireside Chat with Chancellor Sean Parnell & Cabinet in the Student Union Den on Thursday, Oct 13. Sitting in front of the fireplace in the Den, Parnell introduced his cabinet, as well as Ryan Buchholdt, Vice Chancellor of Administrative Services, and Denise Runge, Provost & Executive Vice Chancellor. Sitting up front in the audience were members of the UAA gymnastics team.

At 11:30 a.m. when the meeting started, there were around 50 students and staff members in the Den.

Highlights of the discussion were students and faculty discussing Parnell’s vision for the Strategic Plan 2025 and how his leadership team is making college easier for the students. Parnell mentioned that they had noticed that the Board of Regents had been raising tuition by 5% every year for many years. Parnell said that his team asked them not to, and said that they will ask again. Buchholdt was able to reduce parking fees by 25%. Parnell said with“the cost of gasoline going up, the cost of groceries going up” that they want to make it easier for students and “drop the barriers” for students coming to UAA.

Many important topics were brought up, but the overwhelming star of the show was Parnell and his ability to communicate with students. Anyone familiar with him would say this could be expected, given his background as a lawyer and politician. Every member of his cabinet —be they sitting amongst the students or on stage with him — gave their full attention when audience members spoke up. They made eye contact, they smiled appropriately and they responded as active listeners.

When Parnell pitched to the audience a question, there was sometimes silence. He would joke, and there would be laughter and silence again, then he would ask for students to share a story about their favorite professor or faculty member, or to talk about what brought them to UAA. Audience members smiled as they internally reflected on the answers, with some sharing.

Sara Childress, M.S.W. and director of the Office of Equity and Compliance was asked about barriers to reporting Title IX violations. She said that the office didn’t just want “the red flags… but the yellow flags… it could just be a sexist comment made by faculty in a class ... Or a peer or a student bullying another student.”

Childress said, “most of [the reports] come from faculty or [someone] in residence life” and that they encourage people to report, regardless of how much information they have

She said people “send a simple email .. you can call … Some people call just to ask us ‘should I report this?’ Guess what, you just did!”

Parnell was watching the audience and introduced various people who walked in. When UAA Student Body President Katie Scoggin and Vice President Shanone Tejeda came to the chat midway through, Parnell explained the work that they do, and the work he does with them, mentioning the UAA Caucus and “substantive issues” that they discuss.

The meeting ended on a high note when an audience member asked, “What are you doing to support Native students and Native programming?” This gave Parnell the chance to mention the work of the Alaska Native Success Initiative where he said they were looking at hiring Alaska Native staff and faculty and “making sure that Alaska Native success is part of our DNA… that it is a part of who we are and how we move.”

He hired Michele Yatchmeneff, executive director for Alaska Native Education, and through her department she has worked with other colleges at the dean’s level “to implement their own action teams to take on the challenge… for staff, faculty and students… to create environment, culture and atmosphere” for success. It was here that Parnell said that this was for Alaska Native students, but also for everyone, where everyone belongs.

“We want you to bring all you are into this community.”

He said his administration wasn’t going to see what worked for one group of students and stop there, he wanted that to extend what worked to everyone.

The Chancellor and his team have several opportunities to engage with students throughout the year, and they want to hear from the faculty, staff, and students. Watch for meetings in the future and bring your questions or just drop in and watch to see how the administration interacts with the student body.