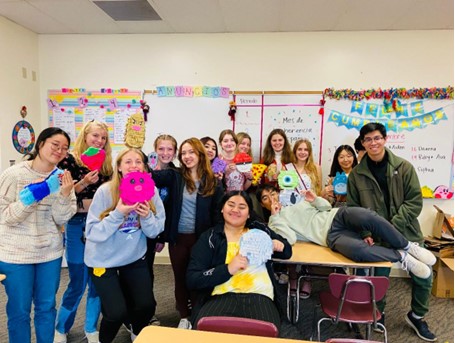 The Anchorage School District held a school board meeting on Oct. 4th, featuring testimonies and comments from students, parents, and teachers regarding the language immersion programs.

Multiple parents advocated for the Two-Way Spanish Immersion Program. This program aims to integrate curriculum to be taught in both Spanish and English, so elementary-school students will have two teachers for every subject.

According to ASD’s website, the Two-Way Spanish Immersion program was started in 1993 at Government Hill Elementary and is the only full dual-language program in the state.

One Government Hill mother gave a public comment on behalf of the thirty year old program during the board meeting.

Laura Nations said the dual-immersion program was a source of unity and inclusivity in Anchorage, based on the demographics of native Spanish speakers in Anchorage, including her own home. “At least half of our teachers and staff in the school speak Spanish and they can work with the parents in their own language,”  she said, “that leads to better outcomes for students and a deeper sense of community.”

“At a time when our community is facing a shortage of workers, cutting this program will make it harder to attract people from out of state and around the state to Anchorage to raise our families.”

According to a report by the Municipality of Anchorage, 18.3 percent of students spoke another language at home in 2014. Immigrants also made up 8.5% of the area’s total population, yet 10.3% of the workforce, contributing $1.9 billion to the city's GDP and more than $160 million to federal and state taxes combined that year.

Keeping language immersion programs could help keep jobs for Spanish speaking educators in the Anchorage area. One student, an eighth grader at Mears Middle school and nine-year-long immersion student, asked the school board to consider the immersion educators.

“Over twenty people I care about would lose their job,” Audrey Bowman said.

Many of the students introduced themselves in their studied languages first then repeated their introductions in English. Growing up bilingual has many benefits for a child’s brain development. Rachel Byers, the Assistant Director at Children's World Bilingual Montessori in Anchorage, named improved memory, concentration, and the ability to think critically and problem solve as examples. She said she worried for the children who have grown attached to their language-learning.

One Anchorage father, Christopher Sis, expressed the same views in front of the school board as he did in a letter to Anchorage Daily News on October 7th. “Spreadsheet savings won’t show you the losses not accounted for,” he said. He listed loss of school revenue, economic and future contributions by families who may move elsewhere if language programs are cut.