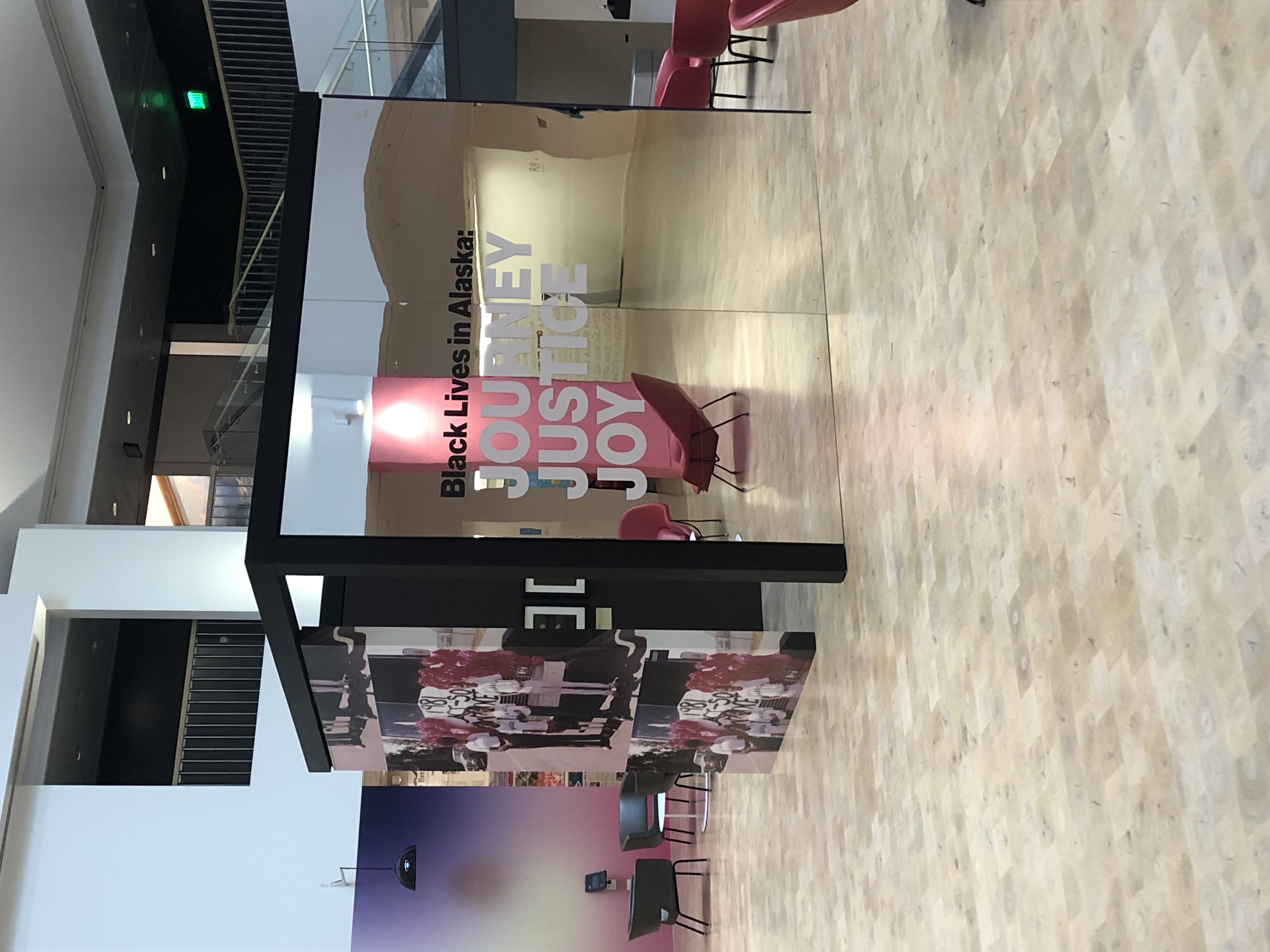 The striking mural in the center of the East Wing Atrium that makes the Black Lives in Alaska exhibit. Photo Credit: Anchorage Museum

Visitors who go to the Anchorage Museum’s East Wing Atrium, location of the Museum’s cafe and several chairs and tables perfect to relax in after walking around the three stories that make up the complex, will find themselves surrounded by Alaskan Black history across its walls. Black Lives In Alaska, on view through February 13th, 2022, is an impactful continuation of the Anchorage Museum’s mission to educate onlookers on the many ethnic and cultural backgrounds that have played a role in shaping Alaska’s identity. With several images and historical documents such as newspapers and catalogues that go back decades into the state’s history, and beyond, the exhibit is split into three sections among the three walls of the Atrium; Journey, Justice, and Joy.

Journey, occupying the rightmost wall, highlights the contributions and struggles of African Americans spanning from the days of pre statehood, where several Black men took part in the diverse whaling crews of the 40s and 50s while others who served in the military even became “Buffalo Soldiers”, assisting settlers coming in for the Skagway and Dyea gold rushes in the 60s. It also highlights Alaska’s own role in the Great Migration, a vast movement of more than six million African Americans from the rural south to cites spanning across the North, Midwest, and West; Alaska often proving to be the Northernmost and most untamed destination for newcomers, a situation many Black men and women such as Bessie Couture, the first Black business owner in Alaska’s history, and Zula Swanson, one of Alaska’s first Black entrepreneurs, were able to take advantage of.

The opposite wall, labeled Joy, shows moments of accomplishment or even smaller but just as meaningful moments of happiness from Black men and women throughout Alaska’s history. It also highlights the visits many Black celebrities and historical figures made to the 50th state, such as the arrival of Hall of Fame pitcher Satchel Paige in 1947 for a series of exhibition games that helped bolster the popularity of minor league baseball in the state; and the play of Black athletes within it.

The northernmost, and most prominent wall, is Justice; showing the many movements against racism and discrimination from the Civil Rights Movement to the modern Black Lives Matter eras that might appear to have been more prevalint in the other states of the nation, but had just as much of an impact in Alaska. It also highlights important milestones for Black voices, such as the founding of Black owned and written newspapers such as The Anchorage Gazette and the creation of the African American Business Directory in 1993; allowing Black owned businesses to network and grow. The political and social movements of Alaska’s past are important to highlight, especially with the current national debate over police brutality and the concept of structural racism.

Outside of the three main wings there are several touch screens that contain catalogues of music from Black artists of the past and present of several genres. There’s also a screening of video archives from The History Makers, the nation’s largest database of African American video and oral histories. At the center of the atrium is a beautiful glass box-like construction that contains an acknowledgement of the curators of the exhibit, chief among them Carl Williams, a community historian featured in the aforementioned History Makers videos, and Ed Wesley, an influential Civil Rights activist of the state and founder of several civil rights focused organizations who provided many of the images and items featured in the exhibit from his personal archives. There are also several cards featured that contain ways to take part in local activism and support Black voices and businesses.

The Anchorage Museum is open Tuesday-Sunday each week from 10 am to 6pm (Noon to 6pm on Sundays). Ticket prices are $20 for an Adult, with a discounted price of $17 for Alaskan residents and $15 for seniors, veterans, and current students, including those enrolled in the university. Tickets for children aged 6-12 are $10 while those aged 5 or younger may enter free.