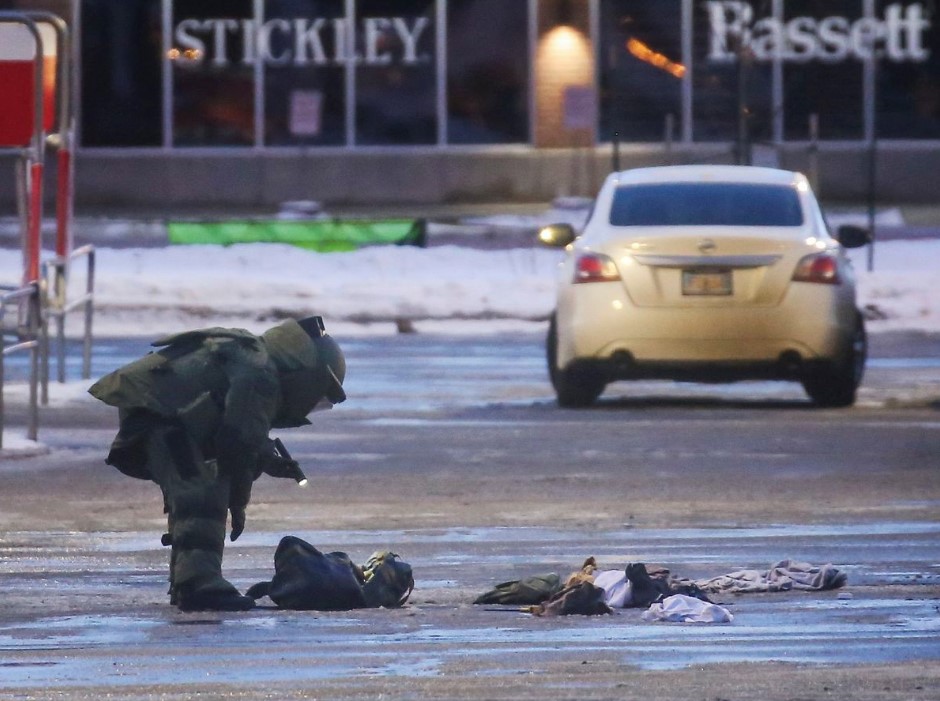 Anchorage man investigates contents of a bag removed from the suspicious vehicle on January 11. Image courtesy of Emily Mesner of ADN.

On Jan. 11, employees at a neighboring business suddenly saw a swarm of police officers surround the midtown mall just across the street from their cafe. Just five days after the attack on the capitol tensions were high, the FBI warned the public that domestic terrorist attacks were possible in the coming days. An area employee expressed concern wondering if this would be one of those possible attacks.  “Nobody knew what was going on. There was a huge police presence. We could see their lights reflecting off our windows in broad daylight,” a local employee said.

The employees never heard back from the police to explain what was going on. A signal 88 security office did however come over to inform them of the situation.

“It was only because we were concerned, I was going around the building to look around and see what was happening, it seemed weird since they were that close. I think they evacuated the mall, but we were pretty close.” She said

“One of the signal 88 guys came in and said that it seemed there was a bomb threat over by rei.”

The area was declared safe and cleared of police around 5pm that evening, the same time many of the businesses in the area close. For many employees this meant spending the majority of the day unsure of what was happening just next door.

Now, a little more than a month later the midtown mall experienced another threat, this time the Dimond Mall was also included. Police said a bomb threat was called in last Tuesday, Feb. 16 for the Midtown Mall and the Dimond Center. Both areas were cleared quickly after a search was conducted.

FBI spokeswoman Chloe Martin stated that the bomb threat in Jan. was an isolated incident and unrelated to Tuesday’s threat.

There is still no official word confirming or denying whether the Jan. 11 occurrence was a bomb threat.

With this in mind the local employee remains a bit nervous for the coming days.

“I don’t think the second bomb threat was taken as seriously, that’s kind of horrifying. What if the next one isn’t considered and we are in the blast zone? I feel like the coyote before the anvil falls on him. It feels like any minute something horrible could happen. Makes me wonder what it will be, I mean will it be a bomb or something else horrifying,” She said

Since the Jan. 6 attack on the capitol and the multiple security threats in town since then, locals have expressed concern over if Anchorage will be the next target.

Another local employee I spoke with Jenn was making deliveries on Jan. 11 to wild scoops and recalls her experience that day.

“Working in midtown there’s kind of always something going on. It's not uncommon to see cops… but to see the roads completely blocked off was odd. I feel like Everyone’s been on edge…  working with so many people, I’m used to having people snap at me but I’m thinking like Oh, if I snap at this person, are they going to do something crazy? My faith in humanity has definitely gone down this year. I kind of just assume the worst now,” She said

Both incidents were resolved with nothing suspicious being found.