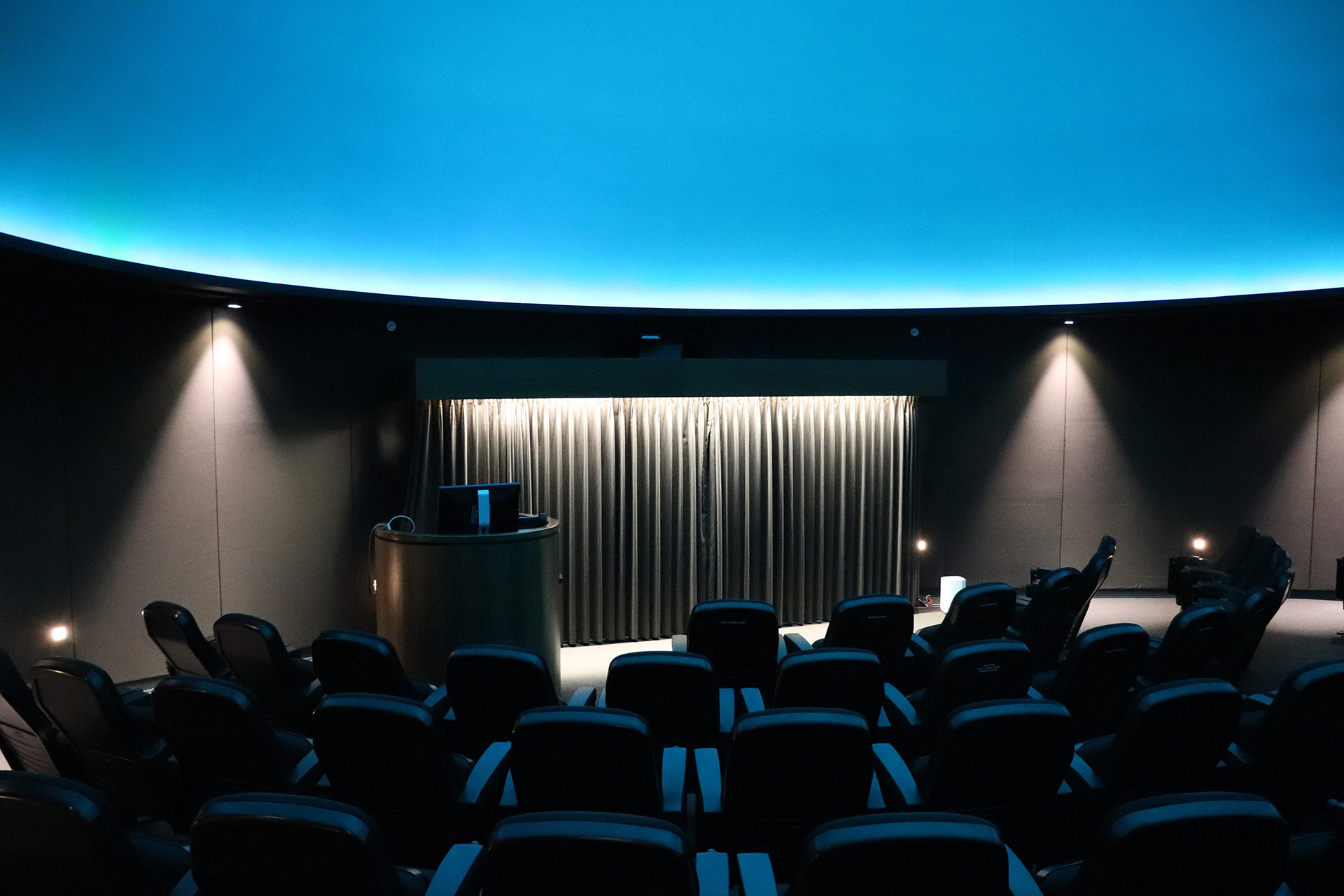 Giving viewers a front-row seat to some of the most dramatic and violent events in natural history, “Exploding Universe,” produced by Clark Planetarium Productions, uses 3D animation to simulate explosions across the universe, both large and small.

Presented on May 13 by UAA’s Planetarium and Visualization Theater, the film took advantage of the planetarium’s 10-meter-wide dome to immerse the audience in a three-dimensional world without the need for VR goggles.

The film started with the mother-of-all explosions – and progenitor of the universe – the big bang. Following a proton that was formed in this initial blast, the subatomic particle journeyed through space and time and helped demonstrate exactly what was happening on the smallest scale when objects of cosmic proportions, like galaxies and black holes, crashed into each other.

Blowups of local concern were on display as well, and the film showcased how destructive events played a part in the formation of the earth and moon, and how asteroids and supervolcanoes helped shape the world today.

The manager of the Planetarium and Visualization Theater, Omega Smith, gave a live presentation after the film demonstrating how the big bang continues to influence the present-day universe. Her presentation also highlighted a few examples of nebulas, which are the result of stellar explosions. After her presentation she answered questions from the audience.

For Smith, this was her first live show back in two years. The planetarium had to shut down in March 2020 when the pandemic began. Only recently have they started presenting films again.

One of the most remarkable aspects of viewing the film in the planetarium was the feeling of being in virtual reality. Before it started, Smith warned about motion sickness and recommended looking at the floor if it became an issue. With a dome-shaped screen that wraps around behind you and extends into the ceiling, there were moments when the walls seemed to vanish.

In one scene, two black holes circled around each other and the jet of material ejecting upwards from in between them looked like a real tower extending vertically into space.

One interesting idea explored by “Exploding Universe” is what will happen when our galaxy, the Milky Way, crashes into our closest neighbor, the Andromeda galaxy. Moving towards each other at 68 miles/second, the gasses in the leading edge of the spiral arms will undergo extreme compression when contact is made. This will result in a tremendous amount of new star formation.

In the Q&A, someone asked about what this event will look like to us on earth and how our solar system might be affected. Smith said that our night sky would change; the Andromeda Galaxy will cross the milky way and form an “X” in the sky. The formation of new stars would also brighten up the night sky.

Due to the vast amount of space in between stars, it’s unlikely our solar system would be affected, although the supermassive black holes in the center of each galaxy will eventually collide.

The crash is several billion years off in the future, so it’s not something that will impact us anytime soon.

While the film was full of impressive visuals, it often glossed over the scientific understanding of the phenomenon portrayed. For someone not familiar with the science, the lack of information could leave one wanting for more explanation.

The tagline for “Exploding Universe” reads, “out of destruction comes the next creation.” As it suggests, a major theme of the film is the way explosive events shape the universe. For example, the earth and moon were formed from a massive collision between two large planetary bodies in the early solar system.

Many of the heavier elements in the universe were formed in the core of stars and during their violent explosions when they collapsed in on themselves. These spectacular blasts also seeded the new elements throughout the galaxies.

Smith’s presentation covered how the big bang helped form the universe's structure. Using the planetarium, she reviewed the scientific history behind the cosmic microwave background, or CMB. Discovered by two scientists using a horn antenna, the CMB is light that is still shining from the big bang.

Due to being so far away and old – concepts which are nearly synonymous when dealing with the cosmological scale – this “light” has been shifted in the microwave end of the electromagnetic spectrum, so it’s not visible to the naked eye.

Despite its age, it still affects the world around us. Smith pointed to the static on old TV sets as a real-world example of where we can see this ancient light from the big bang influencing us today.

According to Smith, the TVs are sensitive to microwave radiation, and around 1% of the static on the screen is from the CMB.

When mapped out, the CMB reveals minute variations in the temperature of the early universe. It is from these miniscule differences that the various objects of the universe – planets, stars, black holes, nebulas – formed. In addition to this, the overarching structure of the existing universe can be seen.

Using the planetarium’s simulator, Smith brought us out of our local galaxy and took us to the edge of the universe, allowing us to see branchlike patterns formed by galaxies and intergalactic gasses. She also ran a timelapse simulation created by a supercomputer called Illustris to show how the current structure can be traced from the CMB.

For future shows, Smith said that they are still working on the schedule for June and July. For those interested in catching upcoming events, she said the best place to look is on the planetarium’s Facebook page.

In the immediate future, there is a show planned for May 20 titled “Birth of Planet Earth.” There are two viewings available: 6:30 p.m. and 8 p.m. The event is a 1-hour film detailing the origins of our planet followed by a presentation by UAA biologist Dr. Brandon Briggs.

Tickets cost $5 for students and $10 for the general public. Also, students can become a member of the planetarium for $15 and receive one free ticket for every show.